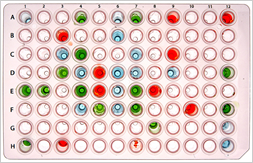 What things can one hope to accomplish by iteratively comparing the genomic sequence (genotype) to the clinical appearance (phenotype) of human beings? 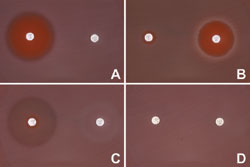 With respect to this last point, I believe that genotypically homogeneous groups of patients will play an essential role in the development of novel therapies for the following reasons. First, it is well recognized that many important clinical entities such as retinitis pigmentosa, age-related macular degeneration, and glaucoma are genetically and pathophysiologically heterogeneous [2-4]. Thus, it seems unlikely that a single type of therapy would be effective against all the different forms of any of these diseases any more than a single type of antibiotic would be likely to be effective against all types of bacteria. Figure 1 extends this antibiotic analogy to illustrate the effect that mechanistic heterogeneity would have on the search for a new drug. In panels A and B, two antibiotics are tested sequentially against pure cultures of two different microorganisms. It is quite easy to see that each of these drugs is very effective against one of the microorganisms but not the other. If one mixes these organisms together before testing with the antibiotic discs (panel C) it is harder to see the therapeutic effect of either drug; and, if this were one small part of a large screen for new drugs, one might decide that neither of these agents was sufficiently promising for further testing. If one mixes ten different organisms together (panel D) the efficacy of the two drugs that was so apparent in the first two panels is completely obscured. Having access to molecularly homogeneous patient populations is analogous to having pure cultures of bacteria to test antibiotics against. Of course, we hope that any new drug will be broadly efficacious but it seems unwise (and unnecessary) to count on this broad efficacy when doing so might cause us to miss the value of an important class of new compounds.

The other very real value of genotypically homogeneous patient populations is the ability to control the timing of a therapeutic intervention as well as the timing of the assessment of its effect. Consider the hypothetical disease process shown in Figure 2. Knowledge of the natural history of this specific genetic subtype of disease allows us to predict the kinetics of visual loss in patients who are not yet severely affected. Suppose that an animal model of this disease suggests that treatment anytime during its course will arrest the disease process. Suppose that business considerations of the drug manufacturer require that efficacy be demonstrated in less than three years with the smallest number of patients possible. What patients should be included in the trial? If patients are included who are three or more years younger than the age of the first downward inflection of the vision curve (or older than the age of plateau of the vision curve), there will be no demonstrable effect of the drug (even if it is 100 percent effective) during the course of the three-year study. In contrast, selecting a group of patients who are just beginning to lose vision (and who are known to have the same molecular form of the disease as the animal model that benefited from the treatment) will give the maximum possible difference between patients and controls and thus be able to detect the efficacy of the drug in the shortest time possible with the smallest possible patient group.

« Return to the Genetic Testing FAQs